What is the Difference between Game Design and Game Art?

We’ll be answering this question using the classic game of Chess. Chess is a well-known game with traditional white chess pieces, black chess pieces, set up on a field of black and white. The pieces have different positions and rules on how they move across the black and white squares. Pieces include a King, a Queen, two Knights, two Bishops, two Rooks, and 8 Pawns on each side of the board. The point of Chess is for one player to capture the other players King. How does this apply to Game Design or Game Art?

No game describes the difference between Game Design and Game Art better than the oldest game in history. Let’s go over the key differences between both of the Game Designer as well as the Game Artist, to explain the inspiration and creation process behind the game of Chess. 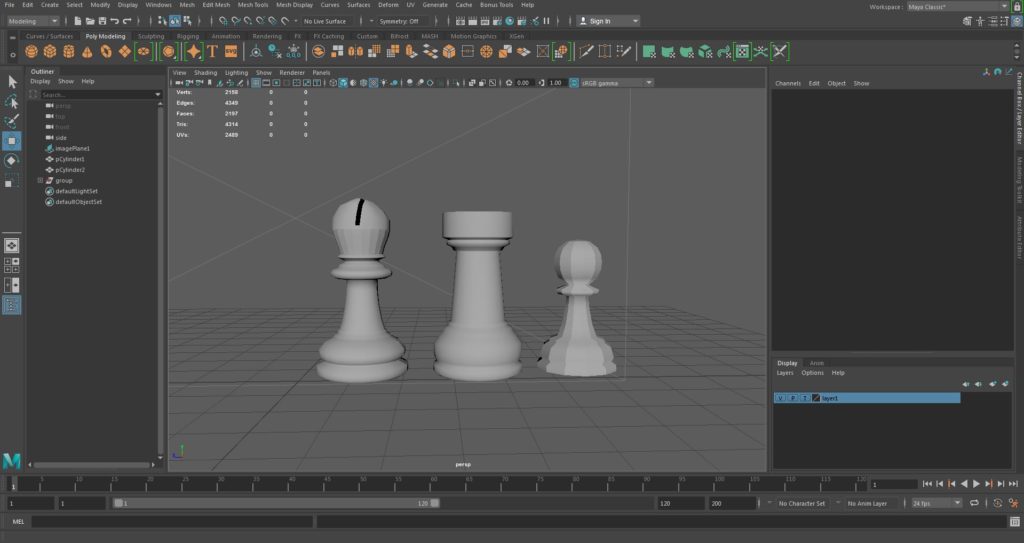 Games always start with design, inspired by a concept or idea. The goal of Chess was to simulate war and the control of lands. It was commonly used as a lesson to teach young monarchs how to adequately judge risk and reward when it came to troop movements. These concepts were applied and solidified the rules of Chess, which were decided by the designer. To visually test this prototype, the designer using a game board made of squares, and two opposing colors that would face off for control of the playing field. They defined each of the pieces by name, and how that piece interacted, which also explained how each piece is moved across the board. The goal was to create a simple objective with hundreds of complex ways to reach the endgame. This was an adequate mental representation of military troop deployment tactics.

A designer’s role helps bring a sense of unity to the team, linking the difference between Game Design and Game Art. Being able to align with the Art and Programming teams organically, but the designer may not have the specialization in either art or programming. A designer has an understanding of both, so that the designer is able to apply their design principles as effectively as possible. They communicate the game’s design principles to the artists so that they know how to animate or model a character. The designer can communicate game design principles to the programmer, so that the programmer can build the foundation (the chess board) and purpose of those characters (the pieces). There’s a huge amount of variety in design jobs, ranging from super specific (Level Design) to overseeing an entire area of the game (Economy or Monetization Design).

We now have the idea of a board with some pieces and rules that each piece must follow. However, the physical representation of each of the pieces and the board does not yet exist, we just have a prototype design. This is where the Game Artist comes into the mix.

The artist uses the design of the game as a guide to create the appearance of the game. Using that information, they will create physical representations of each of the pieces. The opposing sides need to be distinct from each other, and each of the pieces on either side needs to be easily distinguished from one another. The artist then takes the prototype created by the designer, a game board that facilitates the defined movement of each of the player’s pieces, and visually pulls the two opposing sides together creating a visually appealing package. For example, the horses in Chess represent the cavalry Knights who rode on horseback, thus creating the look of the Knight piece.

Art is responsible for delivering a visually appealing product. Who decides what is visually appealing though, and does this mean that the artist gets full control? Not quite. The artist collaborates with the designers and programmers (along with other departments) to achieve a targeted game look that is not entirely controlled by the artists at the end of the day. Getting art into the game requires a pipeline, its own set of tools which inherently require its own type of design as well. If both Art and Programming have design aspects in their roles, what’s left for Game Design?

The Trinity of Development Arms

In interactive entertainment, we have what we call the Trinity of Development Arms to make a product happen. The most well documented arm is in Programming, where the mathematical and practical applications are made into a game. What happens when you add valued mechanics in Chess? What if we introduced Health or Stamina bars to each piece, or damage done by each piece? Programming has a specific, detailed concept of design inherent to their role. Programmers are the engineers that build the tools that create the materials in the game. They are the ones that set the values of each piece’s effectiveness. Which leaves a rather large hole to fill for the other two departments. Design is the most elusive department, due to its contribution to groups in various types of design, but the key difference is that code and art are both specialized fields. We can’t guarantee that they’re going to communicate well all the time.

The simple, quick explanation of the difference between Game Design and Game Art: Game designers figure out the theory, game artist figure out the aesthetics of the game. Together, they can create a well-balanced and beautiful project that people will remember for years to come. To this day, Chess is still played competitively, and the game is thousands of years old with different versions coming from a variety of cultures around the world.